The presence of humans in the Region of Arequipa can be traced back to at least 9000 years ago. An important civilization didn't exist in Arequipa until the arrival of the Incas in the 1300s when Inca Mayta Capac arrived in the valley. Arequipa took on more importance during the Colonial Period and once the Spaniards founded the city of Arequipa in 1540. The capital of the region is an attractive city with a beautiful downtown, which was added to the World Heritage List of the UNESCO in 2000. Its long coast line and high Andean peaks, valleys, and volcanoes offer an ample combination of activities to all types of travelers. The Valley of Arequipa, usually sunny during the doy and cold at night, must be visited by bird watchers, history and anthropology lovers, adventure seekers, and travelers looking for good food.

The Region of Arequipa is located south of lca in the southwestern part of the country. Arequipa is a diverse region with an amazing combination of ecological steps. The Pacific Ocean, bordering Arequipa, has a rich ecosystem with a great variety of seafood. Several rivers originate in the high mountains of Arequipa and give life to several valleys with different species of flora and fauna. Arequipa offers a great variety of natural attractions.

The Region of Arequipa holds the largest number of ancient Andean cave paintings in Peru. The Sumbay Caves show several paintings made by Andean natives using different tones of white, yellow, and red. (Sorne specialists claim that they were made between 6000 and 8000 years ago, but these figures don't seem to be realistic.) These paintings represent the hunting practices of the natives and the animals living in the surrounding area. Between 600 and 800 AD, the Wari and Chuquibamba cultures settled in the surrounding areas of the Majes Valley and carved the biggest collection of rock petroglyphs existent in the Americas. This site is known as the petroglyphs of Toro Muerto. 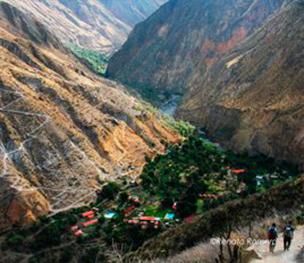 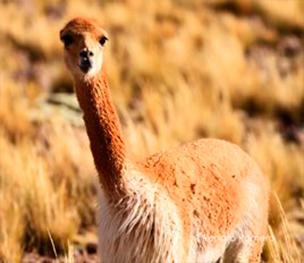 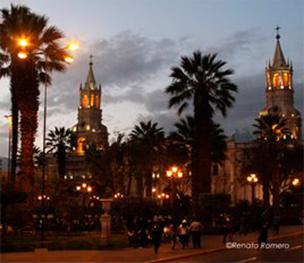 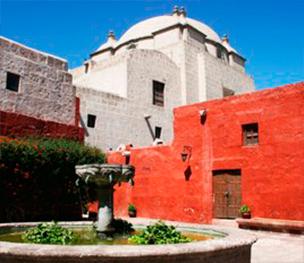 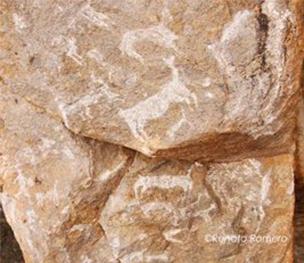 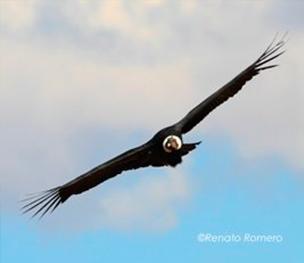 In the early l300s, when Inca Mayta Capac visited the Arequipa Valley and allowed his subjects to colonize it, they settled the towns Yanahuara, Cayma, and Tiabaya, among others. This area doesn't have important Inca buildings, but the Inca terraces can be observed beside the Chili River. The views of the terraces along with those of the Chili River, and the Misti and Chachani Volcanoes are quite impressive. In the ColcaValley, it is possible to observe a few Inca buildings at the Uyo Uyo site near Yanque Town.

When the Spaniards arrived in what is now the City of Arequipa, it was decided that Arequipa would be an important point of connection between the coast and Cusco. Therefore, Arequipa was founded on August 15, 1540 by Don Garcí Manuel de Carbajal. The Spaniards made Arequipa the second most important city of Peru, building several Colonial-style buildings using "El Sillar," which is a volcanic stone. The majority of downtown Arequipa has been built with this whitish stone, giving the city a beautiful look and resulting in its being added to World Heritage List of the UNESCO in 2000. Several hotels offer unique experiences in downtown Arequipa.

Nowadays, Arequipa is still the second most important city of Peru as well as a popular tourist destination for Peruvians and foreign travelers, offering many options such as interesting historical sites, beautiful natural spots, opportunities for bird watching, white water rafting, mountain biking, breathtaking landscapes, and a delicious regional cuisine. Arequipa city and Colca Canyon are the most popular tourist destinations and several tours are available to get the best of it. Arequipa offers options for conventional travelers and adventurers. Arequipa can also offer an interesting nightlife with several bars located in Colonial sites.

Finally, the Region of Arequipa has several climates. The coast has an arid climate with scarce precipitation throughout the year, being pretty warm and sunny during the summer and semi-warm, humid, and cloudy during the rest of the year. The Provinces of Arequipa, Caraveli, and Aplao, located between l000 and 2500 meters above sea level, are semi-dry or dry during the winter and autumn and temperate and humid during  the spring and summer, with precipitation during the summer months (January, February, and March). Above the 2500 m.a.s.l, it is dry and cold during the autumn, winter, and spring; and during the summer months it is humid with heavy rain. The city of Arequipa oscillates between 5ºC and 25ºC from April to December with June, July and August as the coldest months. (The summer months are warmer at night by 3 or 4 degrees.) In the Province of Caylloma, where the Colca Canyon is located, temperatures can be below OºC and can reach 20ºC.