The people of Pucara can be considered to be the first relevant organized group that settled in the Region of Puno (also known as "El Altiplano" due to its lat land in the Andes) around l00 BC. This area was previously occupied by the Qaluyo people around 1400 BC. and it is believed that they were organized at a basic level with a ceremonial temple. Alter the presence of the Pucara people in this region,the Tiahuanaco civilization ruled in this area and a ter them the kingdoms of the Kollas and Lupacas. Once the decay ol Tiahuanaco was imminent in the early l200s AD, a group of them traveled to the north to form what later became the Empire of the Incas in Cusco.

"El Altiplano" started to be ruled by the Incas in the middle of the l400s after they deleated the Kollas. The Incas retained control or a century, until Peru was conquered by the Kingdom of Spain ( 1532 - 1821) . From that moment on,"El Altiplano" became a mining region where its natives lived in poverty and very poor conditions. Nowadays the economic situation ol the locals has improved, but a third of them still live in poverty. Below is a chronology of Puno: 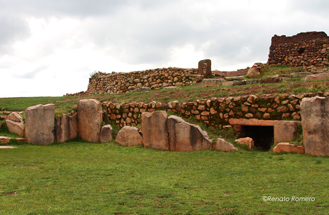 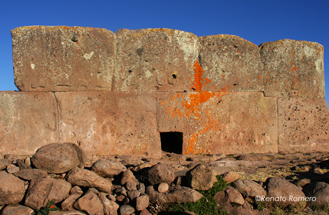 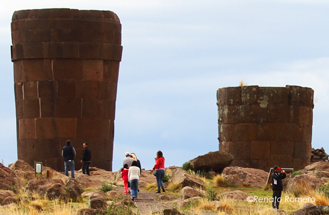 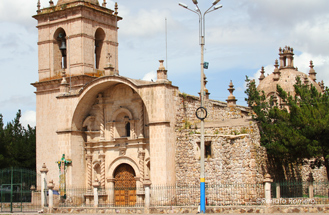 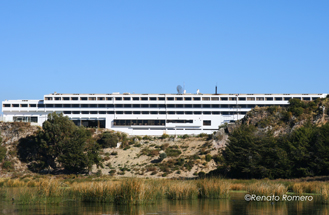 Main Location in Puno: The main site is located northwest of Titicaca Lake on the Collao Plateau. Today the District of Pucara is part of the Province of Lampa.

Beginning of Presence in the Area: The Pucara people started as an organized society a ter local farmers congregated.

Main Survival Activities: Agriculture based on the construction of Andean terraces known as "Andenes" to produce mainly potatoes,   quinoa, corn, "oyuko," "oca" (sweet potato), and "mashua," which is a tuber. The Pucara people were also Andean live stock farmers, domesticating alpacas and llamas.

Political Organization: Pucara was a theocratic society based on the hierarchical organization of their priests on the top level and then the farmers on the second and third levels. They had several deities.

Decay of Pucara: It is believed that a prolonged drought devastated the area, causing the rulers to lose power.

Main Location in Puno: The Tiahuanaco civilization started in what is now Bolivia and from there extended to Puno and other areas in Peru. The main site in Puno had been the area of influence of the Pucara people in the town of the sorne name. (The main site is located in Bolivia.)

Beginning of Presence in the Area: The expansion and consolidation of the Tiahuanaco civilization in Puno and the southern part of Peru started around 650 AD.

Main Survival Activities: Agriculture based on the construction of Andean terraces known as "Andenes" to produce mainly potatoes,   quinoa,   corn, "oyuko," "oca" (sweet potato), and "mashua" which is a tuber. The Tiahuanaco people were also Andean livestock farmers and traders.

Political Organization: It was a hierarchical militarized society with the establishment of Viracocha as the ruling god of the universe. They colonized several territories and controlled their inhabitants through religion and commerce.

Decay of the Tiahuanaco Civilization in Puno: It is believed that the rulers started to weaken and lose power in the region, bringing about rebellions by the local subjugated ethnic groups.

Main Location in Puno: The Incas ruled in the entire region of Puno once the Kollas were defeated by Inca Pachacutec and his army. Probably the most important Inca site was Inca Uyo in the Province of Chucuito.

Beginning of Presence in the Area: Once Inca Pachachutec was chosen to be the next Inca (king), he started to plan the expansion of his empire. Around 1450 Pachacutec led his army to Puno to defeat the Collas, Lupacas, and all other ethnic groups ruling in"El Altiplano." His defeat of the Kollas led to the Lupacas' and other small groups' swearing obedience to Pachacutec.

Political Organization: The Inca Empire was ruled by an Inca king who claimed to be the son of the Sun (most important deity for the Incas) . This was a tyrannical militarized leadership. The locals were controlled and ruled by upper-class subjects of the empire.

Decay of theInca Empirein Puno: With the arrival of the Spaniards in Peruin 1532, Puno lost Inca presence and was colonized soon afterwards.

Main Location in Puno: The Spaniards didn't settle in the Region of Puno right a ter their arrival in Peru. Once the first Spaniards arrived in this region, they chose the City of Puno to be the most important location in the region.

Beginning of Presence in theArea: The first Spaniards arrived in Puno around 1550, drawn by the existence of silver in the region.In l573 Viceroy Francisco de Tudela designated Puno as a town, but it wasn't until November 4, 1668 that it was founded as city.

Main Survival Activities: The region of Puno was a mining area for the Spaniards as well as a transport road between the mines in Bolivia and Arequipa and the Pacific Ocean.

Political Organization: Puno was ruled by the viceroy of the viceroyalty of Peru, who ruled through the "Teniente Gobernador" and other subjects of the kingdom of Spain.

Decay of the Viceroyalty: The freedom of Peru was declared in the Main Square of Lima on 1821, and with this Puno also gained its freedom.

Capital: The capital of the Department (later on Region of Puno) was the city of Puno.

Role of Puno during the First 100 Years: The Region of Puno continued to be a forgotten region with limited resources. In 1913, the farmers of Puno started a movement to reclaim their rights and improve theirliving conditions, but it didn't prove successful.

Puno's Economy: The economy of Puno continued to depend heavily upon mining; however, the production of wool and alpaca fiber became an important component in the economy of the region. The construction of the railroad from Puno to Arequipa See my note about the railroad below under Highlights in 1870 improved the region's economy. Also, Titicaca Lake started to be navigated by major steamboats, which also improved the economy for the locals.

Puno's Culture: The Region of Puno lacked a relevant and important educational system during this period. Thefirst university was founded in 1856, but it was closed in 1866. The inhabitants of Puno who were able to afford an education had to move out of the region and travel to Arequipa, Cusco, or Lima to obtain a degree.

Puno's Art: Puno is a region where locals stand out in ceramics, textiles, and local music and dances. Pucara was and is still famous for its ceramic bulls. During the Festival of "La Virgen de la Candelaria" in the month of February, the best dances and local rhythms were and are still practiced.

Capital: The city of Puno continued to be the capital of the Department and later on the Region of Puno.

Role of Puno in the last 94 years: The Region of Puno continued to be a mining region. The high levels of poverty in the region contributed to the emigration of the natives to other regions such as Arequipa, Cusco, and Lima. The Region of Puno contributes ancient customs to Peru due to the existence of the ethnic groups formed by the Aymaras and the Quechuas.

Puno's Culture: The first public university, which opened and closed in the post century, reopened in 1962 to provide public and free education to the inhabitants of Puno. Later on, a private university opened, also to provide education to the natives of Puno. These universities still lack quality education; there fore, many people in Puno still travel to Arequipa, Cusco, and Lima to obtain a better  education.

Puno's Art: Puno continues to be a region where locals standout in ceramics, textiles, and local music and dances. Pucara is still famous due to its ceramic bulls. The Festival of "La Virgen de la Candelaria" in the month of February is probably the biggest parade in Peru, where several dancing schools dance and compete to be the best in the festival.