The Region of Arequipa has a rich history and a varied landscape. The presence of humans in this region can be traced all the way back to 7000 BC. Dated to be about 5000 years old, the Cave Paintings of Sumbay inthe Andean Mountains at 4127 meters above sea level are an important ancient site. These ancient paintings display the practices, mostly hunting and gathering, of the first Peruvians settled in this area.

The Wari Cultureruled the southem area of Peruincluding aportion of Arequipa,mainly inthe Provinces of Condesuyos and Castilla. The most important site is Toro Muerto near the Valley of Majes. Alter the Wari people ruled part of Arequipa,there wasn't another major empire or civilization to settle in the area until the arrival of the Incas in the l300s.

Arequipa gained more importance in the history of Peru a ter the arrival of the Spaniards,who ounded thecity of Arequipain 1540. Fromthat moment until now Arequipa has assumed more and more prominence in Peru so that today it is second only to Lima.

The Spaniards used Sillar (white volcanic stone) to build beauti ulpieces of Colonialarchitecture. The unique style of downtown Arequipa was a good reason to add it to the World Heritage List of the UNESCO in 2000. Below is a chronology ol Arequipa including only the most important remarks: 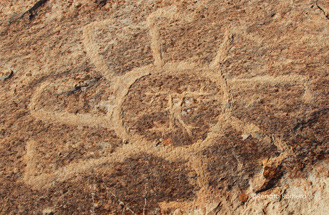 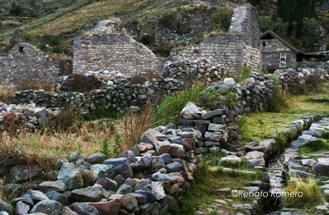 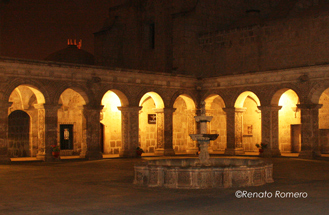 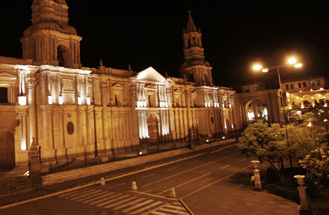 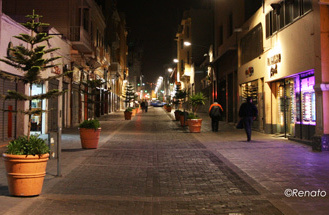 Main Location in Arequipa: Valley of Majes, Province of Castilla, Region of Arequipa

Beginning of Presence in the Area: The Wari people ruled parts of the Condesuyos and Castilla Provinces. These people didn't build any relevant temples or sites in Arequipa.

Decay of Wari in Arequipa: In the lOOOs, the Wari leadership started to weaken, which led to several rebellions in several different regions. Eventually, the colonized in these areas of Arequipa rose up and freed them selves from the Waris.

Beginning of Presence in the Area: lt is believed that Inca /V1ayta Capac in the l300s started the conquest of the people living inthis region by sending his army with
Mitimaes (group of Inca subjects sent to a conquered region to teach new customs and practices) .

Political Organization:  The Inca Empire was ruled by an Inca king who claimed to be the son of the Sun (most irmportant deity for the Incas) . This was a tyrannical militarized leadership.The localswere ruled by the Inca King and controlled by upper­ class subjects of the Empire.

Decay of the Inca Empire in Arequipa: With the arrival of the Spaniards in Peru in 1532, Arequipa lost Inca presence and was colonized soon a ter.

Beginning of Presence in the Area: When the first expedition commanded by Diego de Almagro was returning from Chile in 1537, it was decided that the explorers would stay in the area as farmers. In 1540 don Garcí Manuel de Carbajal decided to found the city of Arequipa. At that time the layout of downtown Arequipa was planned with the location of the main square as well as the main streets and the "solares" (plots) which were assigned to the members of the expedition who took part in the foundation of the city.

Political Organization: Arequipa was ruled by the Viceroy of the Viceroyalty of Peru, who ruled through the "Teniente Gobernador," and other subjects of the kingdom of Spain.

Decay of the Viceroyalty of Peru in Arequipa: Arequipa took an active role in the independence of Peru. Important members of Arequipa supported the army commanded by the Argentinian General San Martin.

Role of Arequipa during the First 100 Years: The Region of Arequipa played an important intellectual role in the independence of Peru. For instance, Juan Pablo Viscardo y Guzmán published the relevant "Carta a los Españoles Americanos," which sets the pillars of the independence doctrine. Once Peru gained its freedom from Spain, several insurrections started in Arequipa and ended with the designation of a new president.

Arequipa's Economy: With the construction of the railroad from Arequipa to Mollendo as well as to Juliaca and Cusco in the early l870s, the Region of Arequipa (department at that time) gained more importance in the economy of the country. The War of the Pacific ( 1879-1884) crashed the economy of Arequipa.

Arequipa's Culture: Arequipa has been an important source of prominent Peruvian personalities such as Mariano Melgar (poet and musician), Dean Valdivia (founder of the Lauretian Academy), Francisco de Luna Pizarro (first President of the Peruvian Congress) and Nicolas de Pierola (President of the Republic) . During this period, the Laurentian Academy was founded for the study of the sciences and arts. Later, in 1827, the Independence National School was inaugurated.The San Agustin University, founded in 1719,continued as an educational institution for the people of Arequipa as well as others.

Arequipa's Art: The art school of the University of San Agustín has a well-deserved reputation which was first obtained during the Colonial period and continued during the Republic.The museums of Arequipa exhibit relevant pieces of art painted by locals, other Peruvians, and many important foreigners. The Santa Catalina Monastery exhibits great pieces of art.

Capital: The capital of Arequipa continued to be the city of Arequipa.

Arequipa's Economy: Arequipa invested in the construction of immense water reservoirs in the high mountains of the Andes to provide water for the future to the people of Arequipa and the thousands of hectares dedicated to agriculture. In 1966, the construction of the Industrial Park brought progress to the region. Later on,the Majes-Siguas project added 60,000 hectares of land for agriculture.

Arequipa's Culture: Arequipa continued to educate prominent Peruvian personalities. The schools and universities hove played an important role in the history of Arequipa and Peru. For instanee, Mario Vargas Llosa, born in Arequipa, is a winner of the Nobel Prize for Literature. His novels are known world wide and hove been translated  into  several foreign languages.

Arequipa's Art: The art school of the University of San Agustín continues to improve the artistic skills of the Arequipa people. "La Casa del Moral"or "La Mansion del Fundador"offers great exhibitions of art from locals, other Peruvians, and foreigners.